Review: If Only I Could Tell You

Hannah Beckerman’s latest novel is about a family forever transformed by deep secrets. For decades, Audrey has hoped for her two daughters, Lily and Jess, to make amends. She desperately wants her two granddaughters to meet each other. Though Audrey doesn’t know why, Jess refuses to talk to her older sister Lily, even refuses to be in the same room together. The estrangement was preceded by two tragic events over 30 years ago, and the family hasn’t been the same since. Now, as she ages, all Audrey desires is for her family to come back together.

The novel was quietly suspenseful. While Beckerman did an excellent job with the pacing, only revealing a bit of the story at a time to keep you turning the page, I found the characters frustrating. I was drawn to this novel because it was about sisters, but I have to say, I couldn’t relate to their relationship at all. I constantly wanted to yell at them to just communicate with each other; for middle-aged women, they acted extremely childish. Audrey, too, could’ve done a better job of trying to understand exactly why her children refused to talk, rather than continuing to push them together without warning.

If Only I Could Tell You is a family saga full of tough topics. In it, you’ll find miscarriage, terminal illness, suicide, and an all-around dysfunctional family. Despite the amplified drama, Beckerman’s portrayal overall seems realistic, and it can be quite raw and emotional. If you’re prone to crying while reading, definitely grab some tissues.

If you’re in a book club, this would also be an interesting book to discuss. Lots of ground to cover for sure. 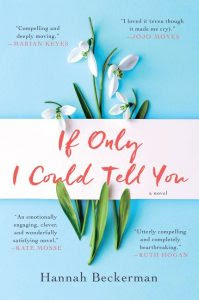 About If Only I Could Tell You

“I loved it (even though it made me cry).”—Jojo Moyes

For fans of This Is Us comes a story of a family divided and the secret that can possibly unite them – a life-affirming novel with a twist will break your heart and an ending that will put it together again.

A secret between two sisters.

A lifetime of lies unraveling.

Can one broken family find their way back to each other?

Audrey’s dream as a mother had been for her daughters, Jess and Lily, to be as close as only sisters can be. But now, as adults, they no longer speak to each other, and Audrey’s two teenage granddaughters have never met. Audrey just can’t help feeling like she’s been dealt more than her fair share as she’s watched her family come undone over the years, and she has no idea how to fix her family as she wonders if they will ever be whole again.

If only Audrey had known three decades ago that a secret could have the power to split her family in two, and yet, also keep them linked. And when hostilities threaten to spiral out of control, a devastating choice that was made so many years ago is about to be revealed, testing this family once and for all.

Once the truth is revealed, will it be enough to put her family back together again or break them apart forever?

“Utterly compelling and completely heartbreaking. I couldn’t put it down.” — Ruth Hogan

“Totally engrossing, achingly sad and so perceptive about the corrosive legacy of family secrets.”—Kate Eberlen, author of Miss You 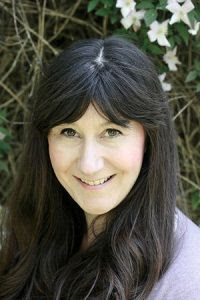 Hannah Beckerman studied English at King’s College (London) for her undergraduate degree, and at Queen Mary  and Westfield (London) for her master’s degree. She spent twelve years working in television, first as a producer for the BBC and subsequently as a commissioning editor for arts and documentaries at Channel 4 and the Discovery Channel USA. She lived in Bangladesh for two years, working for the BBC World Service Trust. She is now a full-time author and journalist as well as a book critic and features writer for the Observer, the FT Weekend Magazine and the Sunday Express. She is also a regular chair at literary festivals and events and has been a judge for numerous book prizes including the Costa Book Awards. If Only I Could Tell You is Hannah’s second novel. She lives in London with her husband and daughter.

I agree, these sisters were just the worst. I actually liked Lily more than I did Jess. Though she was more rigid and cold, I felt like she was trying her best whereas Jess was just cruel and refused to see other people’s point of view. In the end though, I absolutely loved this book! Thank you for being on this tour. Sara @ TLC Book Tours