Review: The Handmaid’s Tale and The Testaments
#amreading: LQ’s Most Recent Reads – November 2020
Review: This Is All He Asks of You
A Brand New Way to Find Your Next...
Review: The New Sotheby’s Wine Encyclopedia
Hell and High Water: A Maeve Malloy Mystery...
Review: Midnight Sun and Twilight by Stephenie Meyer
Cosmos: Possible Worlds Book Tour
Review: Sugar Run
Review: Christmas Ever After
Book ReviewsCrime/Mystery

A Bitter Feast is a much anticipated addition to the Duncan Kincaid and Gemma James series.

Fans of Louise Penny and Tana French will love the tightly-wound, yet twisting plots of these addictive mysteries. The series centers around Scotland Yard Detective Superintendent Duncan Kincaid and his wife, Detective Inspector Gemma James. Like any detective series, it’s best read from the beginning to fully understand all of the characters and backstories. However, this also reads pretty well as a stand alone novel.

Duncan and Gemma leave the bustling city for a relaxing weekend in the Cotswolds with their three children. However, an automobile accident followed by a series of suspicious deaths quickly put an end to any hopes for a quiet trip to the countryside.

Filled with beautiful images of the English countryside and detailed scenes of kitchens and food, A Bitter Feast offers much more than the classic whodunnit. Combie’s fully developed characters really make this series stand out from others. In this installment, readers get to know Duncan and Gemma’s fifteen year old son, Kit, as he begins to come into his own.

A Bitter Feast will have readers guessing to the very end and promises not to disappoint.

Thanks to TLC Book Tours for providing me with a copy of this book to review. 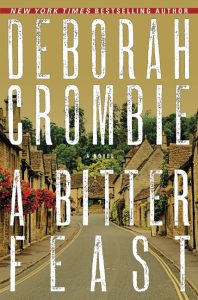 About A Bitter Feast

“Crombie’s characters are rich, emotionally textured, fully human. They are the remarkable creations of a remarkable writer.”—Louise Penny

New York Times bestselling author Deborah Crombie returns with a mesmerizing entry in her “excellent” (Miami Herald) series, in which Scotland Yard detectives Duncan Kincaid and Gemma James are pulled into a dangerous web of secrets, lies, and murder that simmers beneath the surface of a tranquil Cotswolds village.

Scotland Yard Detective Superintendent Duncan Kincaid and his wife, Detective Inspector Gemma James, have been invited for a relaxing weekend in the Cotswolds, one of Britain’s most enchanting regions, famous for its rolling hills, golden cottages, and picturesque villages.

Duncan, Gemma, and their children are guests at Beck House, the family estate of Melody Talbot, Gemma’s detective sergeant. The Talbot family is wealthy, prominent, and powerful—Melody’s father is the publisher of one of London’s largest and most influential newspapers. The centerpiece of this glorious fall getaway is a posh charity harvest luncheon catered by up-and-coming chef Viv Holland. After fifteen years in London’s cut-throat food scene, Viv has returned to the Gloucestershire valleys of her childhood and quickly made a name for herself with her innovative meals based on traditional cuisine but using fresh local ingredients. Attended by the local well-to-do as well as national press food bloggers and restaurant critics, the event could make Viv a star.

But a tragic car accident and a series of mysterious deaths rock the estate and pull Duncan and Gemma into the investigation. It soon becomes clear that the killer has a connection with Viv’s pub—or, perhaps, with Beck House itself.

Does the truth lie in the past? Or is it closer to home, tied up in the tangled relationships and bitter resentments between the staff at Beck House and Viv’s new pub? Or is it more personal, entwined with secrets hidden by Viv and those closest to her? 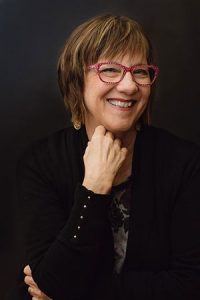 Deborah Crombie is a New York Times bestselling author and a native Texan who has lived in both England and Scotland. She now lives in McKinney, Texas, sharing a house that is more than one hundred years old with her husband, three cats, and two German shepherds.

This sounds like the perfect book to curl up on the couch with a blanket this fall! Thank you for being on this tour. Sara @ TLC Book Tours