Story: A split narrative, The Lost Daughter by Gill Paul follows Maria Romanov as her family is placed under house arrest and subsequently dismantled. She finds herself forced to place her trust in one of the guards assigned to the family in a moment that will alter the course of her life. Decades later, Val Doyle has survived an abusive father only to find herself married to a vicious and abusive husband. After her father’s death, Val is swept into solving the mystery of his final words and finds much more about her past than she anticipated. Paul shares these women’s strength, courage and perseverance in the face of trial and tragedy as each tries to find a bit of peace.

This was his moment; his place in the history books beckoned.

Why: I tend to spend my reading hours devouring historical fiction specifically set around World War II. I chose to branch out for this title because I’ve read Gill Paul before – check out my review of Another Woman’s Husband – and I am not very well-versed in the Romanov story. The mystery and intrigue surrounding the family caught me and these split narrative stories that work toward a convergence in the end have grown on me the last few years. I like to see how the pieces start fitting together and how the author builds toward that moment of clarity.

The forest was so dense that little light penetrated. There were just a few slanting shafts as the sun rose higher in the sky. The air was damp and smelled strongly of spruce.

Opinion: I did not like this book for a good number of pages when I started. It is dark and somewhat of a heavy read. Fitting, given the stories, but my empathetic little heart had trouble reading such distressing tales! What I appreciate about Gill Paul’s writing, however, is that I couldn’t put it down; I couldn’t give up on it. I wanted to know what happened, I wanted to know the women would be ok!

Ultimately, this doesn’t top my “favorites” list, but I wanted to give Paul another chance after not loving Another Woman’s Husband, and I’m glad I did. The writing, the details, the descriptions are all high quality, and there is an overall sense that her characters are genuine and stories are relatable. I’m sure that is due in large part to the vast amount of research that is evident throughout the book.

Spring was on the way, but it still got chilly in the darkest hours of the night.

Recommendation: This is not a book for younger readers. Also, while I believe they are addressed openly and honestly yet tactfully, there are a number situations that could trigger emotions for people such as abusive relationships, infertility and rape. That said, if you’ve read Gill Paul before, I do not think you’ll be disappointed. I consider this another romance-for-those-who-don’t-like-romance-novels book in addition to a solid work of historical fiction. Would be a good read to dive into as the nights get cooler and the air gets crisper!

About The Lost Daughter

If you loved I Am Anastasia by Ariel Lawhon you won’t want to miss this novel about her sister, Grand Duchess Maria. What really happened to this lost Romanov daughter? A new novel perfect for anyone curious about Anastasia, Maria, and the other lost Romanov daughters, by the author of The Secret Wife.

1918: Pretty, vivacious Grand Duchess Maria Romanov, the nineteen-year-old daughter of the fallen Tsar Nicholas II, lives with her family in suffocating isolation, a far cry from their once-glittering royal household. Her days are a combination of endless boredom and paralyzing fear; her only respite are clandestine flirtations with a few of the guards imprisoning the family—never realizing her innocent actions could mean the difference between life and death

1973: When Val Doyle hears her father’s end-of-life confession, “I didn’t want to kill her,” she’s stunned. So, she begins a search for the truth—about his words and her past. The clues she discovers are baffling—a jewel-encrusted box that won’t open and a camera with its film intact. What she finds out pulls Val into one of the world’s greatest mysteries—what truly happened to the Grand Duchess Maria?

Gill Paul is an author of historical fiction, specializing in relatively recent history. She has written two novels about the last Russian royal family: The Secret Wife, published in 2016, which tells the story of cavalry officer Dmitri Malama and Grand Duchess Tatiana, the second daughter of Russia’s last tsar; and The Lost Daughter, published in October 2018, that tells of the attachment Grand Duchess Maria formed with a guard in the house in Ekaterinburg where the family was held from April to July 1918.

Gill’s other novels include Another Woman’s Husband, about links you may not have been aware of between Wallis Simpson, later Duchess of Windsor, and Diana, Princess of Wales; Women and Children First, about a young steward who works on the Titanic; The Affair, set in Rome in 1961–62 as Elizabeth Taylor and Richard Burton fall in love while making Cleopatra; and No Place for a Lady, about two Victorian sisters who travel out to the Crimean War of 1854–56 and face challenges beyond anything they could have imagined. 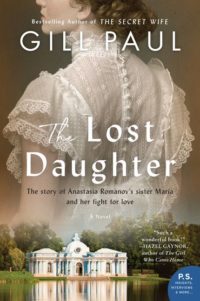 Thank you for mentioning possible triggers, any of those might be hard for a reader, and it’s nice knowing before going in. This sounds completely fascinating though and I added it to my winter reading list. Thank you for being on this tour! Sara @ TLC Book Tours