I was attracted to Meg Mitchell Moore’s The Islanders because it seemed like a light, beach-y read—perfect for summer and getting me out of my reading slump. It follows three main characters on Block Island, an island off the East Coast. Joy, the owner of a cafe specializing in whoopie pies; Anthony, a writer who is using Block Island as an escape of sorts; and Lu, a stay-at-home mother of two with a secret.

Joy has a bit of a Lorelai vibe, owing mostly to the fact that she has a teenage daughter, Maggie, and they get along swimmingly (for the most part). She owns her own business, the popular but struggling Joy Bombs, where Maggie sometimes helps out. This summer, a new food truck rolls into town to compete for the business of tourists and locals alike.

Anthony Puckett wrote a phenomenal debut novel but was less lucky with his follow-up. With the fame of his thriller-author father looming between them both, Anthony is looking for a break from the pressure of expectation. He also needs to regroup following talks of divorce with his wife Cassie.

Lu used to be a corporate lawyer—and a good one too. When her second son was born, she and her surgeon husband, they agreed she would stay home to raise them both. Unfortunately, it’s not as fulfilling as she expected, and Lu aches for something else to keep her busy. She takes on a secret (but public) project and it’s growing popularity leaves her time somewhat compromised.

I think it’s safe to say (without spoilers) that none of these three ends the summer exactly as they began it. Their lives meet and separate, all the while Block Island in the background. I was pleasantly surprised that this was so much more than “just a beach read,” though it’s certainly wonderful light reading and would be excellent for vacation. If you’re a lover of food (like myself), the promise of delicious descriptions and a whoopie pie recipe at the end may also entice you. 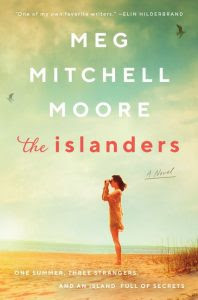 “One of my own favorite writers.” –Elin Hilderbrand

Anthony Puckett was a rising literary star. The son of an uber-famous thriller writer, Anthony’s debut novel spent two years on the bestseller list and won the adoration of critics. But something went very wrong with his second work. Now Anthony’s borrowing an old college’s friend’s crumbling beach house on Block Island in the hopes that solitude will help him get back to the person he used to be.

Joy Sousa owns and runs Block Island’s beloved whoopie pie café. She came to this quiet space eleven years ago, newly divorced and with a young daughter, and built a life for them here. To her customers and friends, Joy is a model of independence, hard-working and happy. And mostly she is. But this summer she’s thrown off balance. A food truck from a famous New York City brand is roving around the island, selling goodies—and threatening her business.

Lu Trusdale is spending the summer on her in-laws’ dime, living on Block Island with her two young sons while her surgeon husband commutes to the mainland hospital. When Lu’s second son was born, she and her husband made a deal: he’d work and she’d quit her corporate law job to stay home with the boys. But a few years ago, Lu quietly began working on a private project that has becoming increasingly demanding on her time. Torn between her work and home, she’s beginning to question that deal she made.

Over the twelve short weeks of summer, these three strangers will meet and grow close, will share secrets and bury lies. And as the promise of June turns into the chilly nights of August, the truth will come out, forcing each of them to decide what they value most, and what they are willing to give up to keep it. 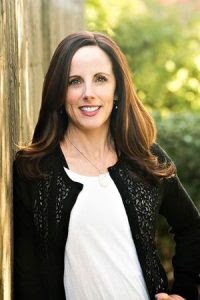 Meg Mitchell Moore works as a non-fiction writer in Newburyport, Massachusetts, where she lives with her husband and three young daughters.

I’ve seen this one a couple of different places. It sounds great!

I normally don’t read books beyond 300 pages, but I am going to make the exception for this one! Thanks for being on this tour. Sara @ TLC Book Tours