Review: The Desert Sky Before Us

I think a good word to describe this book is “unusual” – in a good way!

Two sisters, one fresh out of jail for setting a fire in a library (Billie) and one former NASCAR driver (Rhiannon), are grieving their mother. A famous paleontologist studying stegosaurus plates, their mother was an anchor in their lives. Unbeknownst to them, she was planning something for them as she was dying from cancer.

In short, the sisters end up on a nation-wide geocaching trip to uncover what it is that their mother has hidden in meaningful locations across the country. Having spent 6 years apart due to Billie’s incarceration, they now have to spend day upon day together in a car. A lot of things happen on that trip – some of them life-changing.

There were a couple things that made this book unusual:

First and foremost, this book is about a lot of grief. Not only are the sisters grieving their mother, but Billie is grieving 6 years of “lost” life and her strained relationship with her father, and Rhiannon is grieving her lost racing career and her breakup with her girlfriend. Both sisters are sort of adrift, not knowing what should come next for them on the road of life.

Overall, I really liked this book. I could feel the deep grief that both main characters carried, and I felt connected to them. I was along for the ride, cheering them on in finding themselves out on the road. The one and only thing I didn’t like as much was a side plot about plane crashes. Rhiannon is really obsessed with them, and I think they were used/mentioned too much throughout the story. If you read it, I’d love to know what you think!

Sunday, May 26th: Books and Bindings

Thursday, May 30th: The Desert Bibliophile

About The Desert Sky Before Us 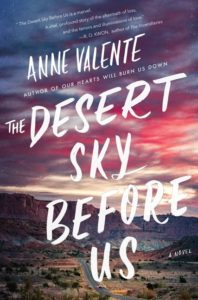 “The Desert Sky Before Us is a marvel. A vital, profound story of the aftermath of loss, and of the terrors and illuminations of love.” —R.O. Kwon, author of The Incendiaries

From award-winning author Anne Valente comes this poignant and unforgettable literary novel of two estranged sisters—one, a former racecar driver and the other a recently-released prisoner—who embark on a road trip together to complete the scavenger hunt their mother designed for them before her death.

When Billie is released from a correctional facility in Decatur, her sister Rhiannon is there to meet her, even though the two haven’t seen each other in months. Painful secrets and numerous unspoken betrayals linger between them—but most agonizing is the sudden passing of their mother, a renowned paleontologist.

Rhiannon and Billie must overcome their differences as they set off on a road trip west, following the breadcrumb-trail of their late mother’s scavenger hunt, a sort of second funeral she planned in her final days. The sisters know the trail will end in Utah at the famous Cleveland-Lloyd Quarry, where their mother spent her career researching dinosaur fossils. But the seemingly endless days on the road soon take their toll, forcing Rhiannon and Billie to confront their hostilities and revisit old memories—both good and bad.

As they travel across the heart of America, and as a series of plane crashes in the news make their journey all the more urgent, the two sisters begin to rediscover each other and to uncover their late mother’s veiled second life, taking them on an unexpected emotional journey inward—and forcing them to come to terms with their own choices in life. 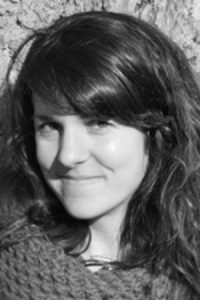 Anne Valente’s first short-story collection, By Light We Knew Our Names, won the Dzanc Books Short Story Prize. Her fiction appears in One Story, The Kenyon Review, The Southern Review, and the Chicago Tribune, and her essays appear in The Believerand the Washington Post. Originally from St. Louis, she teaches creative writing and literature at Hamilton College.

Review: The Binder of Lost Stories

I really like that you mentioned the things that made this book unusual (and no, I can’t think of a book I’ve ever read that had anything to do with geocaching, let alone doing it cross country) because that’s the kind of thing that makes someone pick up the book! Thank you for being on this tour. Sara @ TLC Book Tours