Story: Resistance Women by Jennifer Chiaverini is a story of ordinary people doing extraordinary things. More specifically, this is a work of fiction based on the real life of Mildred Fish Harnack, her husband Arvid, and the work that they, and their group of friends, did to subvert the Nazi advances in Europe during WWII. Scholars and educators at heart, this group of civilians risked their lives to gain bits of intelligence in order to resist the the violence Hitler was propagating. Operating covertly for years, the small cell of experiences the full force of Nazi evil when they are compromised after a message is intercepted.

‘Darling, you must never become accustomed to the extraordinary and the outrageous. If you do, little by little, you’ll learn to accept anything.’

Why: When I read in the book description that one of the main characters, Mildred, studied at the University of Wisconsin – Madison, I knew I had to read it. (I am a Wisconsin Badger born and bred, and actually have a Bachelor of Science in Journalism from the university to boot!) The fact that its WWII era historical fiction and written by a New York Times bestselling author were icing on the cake.

All the while they steal glances at each other, silent messages that they are not alone, that there is always hope, that when one least expects it a shaft of light might pierce the darkest sky.

Opinion: Two pages into part one, I was reading details about a campus near and dear to my heart, but beyond that, it took me a little while to get invested in the story. I’m going to blame a lot of that on my personal schedule while I was reading the book, but the other small piece is that Chiaverini includes so many details – wonderful, well-researched details – that it was hard to keep things straight as I was learning the characters. Even as an avid WWII reader, I would have benefitted from having a map handy too!

Once I got into the meat of the plot, however, I was devouring pages to find out how it would end. I am disappointed that I didn’t know Mildred’s story until reading the book, but I appreciate Chiaverini’s telling of it. It isn’t all sunshine and happy endings and balances the fact and fiction in a way that is engaging without becoming disingenuous.

Then he was running toward her, and then he was in her arms, and then she swept him up and held him close as if she would never let him go.

Recommendation: I believe readers who enjoy and are seeking books similar to Kate Quinn’s The Huntress, Jessica Shattuck’s The Women in the Castle, or Pam Jenoff’s The Lost Girls of Paris will enjoy this novel. I’ve been seeing a number of books coming out lately that are addressing the lesser known roles women played in the war, and I think this is another great addition to that list. It is not a light read, however, and I do recommend giving yourself the time to devote to it to get the full effect. I hope to read it again myself to appreciate Chiaverini’s work even more!

From the New York Times bestselling author of Mrs. Lincoln’s Dressmaker, an enthralling historical saga that recreates the danger, romance, and sacrifice of an era and brings to life one courageous, passionate American—Mildred Fish Harnack—and her circle of women friends who waged a clandestine battle against Hitler in Nazi Berlin.

After Wisconsin graduate student Mildred Fish marries brilliant German economist Arvid Harnack, she accompanies him to his German homeland, where a promising future awaits. In the thriving intellectual culture of 1930s Berlin, the newlyweds create a rich new life filled with love, friendships, and rewarding work—but the rise of a malevolent new political faction inexorably changes their fate.

As Adolf Hitler and his Nazi Party wield violence and lies to seize power, Mildred, Arvid, and their friends resolve to resist. Mildred gathers intelligence for her American contacts, including Martha Dodd, the vivacious and very modern daughter of the US ambassador. Her German friends, aspiring author Greta Kuckoff and literature student Sara Weitz, risk their lives to collect information from journalists, military officers, and officials within the highest levels of the Nazi regime.

For years, Mildred’s network stealthily fights to bring down the Third Reich from within. But when Nazi radio operatives detect an errant Russian signal, the Harnack resistance cell is exposed, with fatal consequences.

Inspired by actual events, Resistance Women is an enthralling, unforgettable story of ordinary people determined to resist the rise of evil, sacrificing their own lives and liberty to fight injustice and defend the oppressed.

Jennifer Chiaverini is the New York Times bestselling author of several acclaimed historical novels and the beloved Elm Creek Quilts series. A graduate of the University of Notre Dame and the University of Chicago, she lives with her husband and two sons in Madison, Wisconsin. 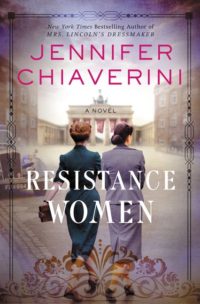 Thank you for being on this tour! Sara @ TLC Book Tours