Some time away. A relaxing trip to the Scottish Highlands, just you and your friends.

It’s supposed to be fun.

But there’s tension in the air, and soon you realize you’re stuck in a remote wilderness with people you don’t actually know very well at all.

The Hunting Party by Lucy Foley, published by Harper Collins, follows seven friends as they reunite for a weekend away in the Scottish wilderness. Once the group of former Oxford students is together again, they fall right back into their original roles. They’re no longer the sophisticated business women or high-powered stock brokers that they are in their day-to-day lives. They’re naive, competitive young adults again.

I was slightly concerned about the predictability of this novel, given its Agatha Christie-like style: a group of friends, stranded in one place, and one of them gets murdered.

Let me tell you.

That was a non-issue. This novel was an absolute thrill to read. It was completely unpredictable in spite of its basic, predictable formula.

I also expected to find the shifting narrator annoying, but I can safely say it served to ramp up the suspense and generate intrigue, rather than irritate. Two narrators is usually my limit, but the five narrators in this novel worked exceptionally well together.

The characters were at once shocking and entirely relatable, each one a sort of extreme version of smaller parts of all of us.

All of them tripping over themselves in an effort to avoid looking like they might not have their lives completely under control.

They all have their secrets, and they’re all trying to keep moving forward. To start the new year fresh.

But, when every one of them is hiding something, how do you know whom to trust?

You can skip your morning run, cancel your evening Zumba class. Lucy Foley’s suspenseful thriller, The Hunting Party, will get your heart pumping just as fast. 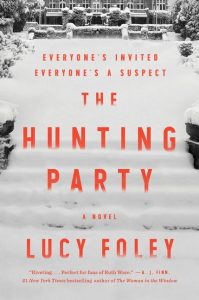 About The Hunting Party

For fans of Ruth Ware and Tana French, a shivery, atmospheric, page-turning novel of psychological suspense in the tradition of Agatha Christie, in which a group of old college friends are snowed in at a hunting lodge . . . and murder and mayhem ensue.

All of them are friends. One of them is a killer.

During the languid days of the Christmas break, a group of thirtysomething friends from Oxford meet to welcome in the New Year together, a tradition they began as students ten years ago. For this vacation, theyíve chosen an idyllic and isolated estate in the Scottish Highlandsóthe perfect place to get away and unwind by themselves.

They arrive on December 30th, just before a historic blizzard seals the lodge off from the outside world.

Two days later, on New Year’s Day, one of them is dead.

The trip began innocently enough: admiring the stunning if foreboding scenery, champagne in front of a crackling fire, and reminiscences about the past. But after a decade, the weight of secret resentments has grown too heavy for the groupís tenuous nostalgia to bear. Amid the boisterous revelry of New Yearís Eve, the cord holding them together snaps.

Keep your friends close, the old adage goes. But just how close is too close?

Please use the hashtag #thehuntingparty and tag @tlcbooktours and @williammorrowbooks. 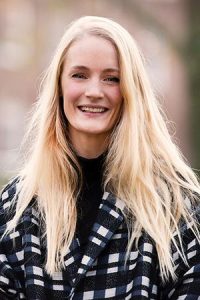 LUCY FOLEY is a former editor at Hodder Fiction and has been both a literary agent and a bookseller. An avid painter, she now writes full time and lives in London, England.

book reviewI would recommend this book to othersTLC Book Tours

I’m glad you enjoyed this one! I added it to my to-read list. Thanks for being on this tour!

This sounds a lot like The Secret History. At the same time, even if it is similar, your review is making me want to read it right now. Adding to my TBR right now!