How do you decide when to give up...
Book Review: The Things We Cannot Say
#amreading: LQ’s Most Recent Reads – February 2020
The Incendiaries: A Review
Be My (Literary) Valentine
Book Review: Minor Dramas & Other Catastrophes
5 Romantic Graphic Novels to Cozy Up with...
Mysteries That’ll End a Reading Slump
TBR Mix n’ Mingle – February 2020
Review: Truly Devious Series
Book ReviewsCrime/MysterySuspense/Thriller

Review: Before She Knew Him

I almost always enjoy my TLC picks. Mostly that’s because TLC has great books, but also within Literary Quicksand, we each choose books we think will be a good fit for us to review. But this one – holy, I got lucky.

Janna actually reviewed Peter Swanson’s debut novel, The Kind Worth Killing in January 2017, and it was one of my first introductions to both LQ and Swanson. So when I saw Swanson’s name on that list, I knew I had to get this book to review. And I’m SO glad I did.

Before She Knew Him is a holy terror of a book. It’s quick, it’s dirty, and it’s smart. Swanson writes women really well, so it’s believable that the protagonist, Hen, has moved in next door to a killer. Coincidentally, she is also a murder mystery fanatic, which isn’t too surprising considering it’s a huge phenomenon in 2019, with a timely example being the Golden State Killer case closing, at great contribution by amateur sleuths. What IS surprising, is the amount of twists that Before She Knew Him takes in getting to the conclusion. This is not a book you’re going to guess the ending to; in fact, there are multiple red herrings, 90 degree turns, and one complete surprise that left me spinning. The book isn’t terribly gory, so fans of the thriller genre who don’t love horror might find that somewhat appealing as well.

Overall, I 110% recommend Swanson’s latest release. I haven’t read his sophomoric novel, and I plan to now, as well as pretty much anything he chooses to write in the future. Heck, I think I’d read his cookbook (but this genre is way better so Mr. Swanson, if you’re reading this, please continue doing great work!). Much thanks to William Morrow books for the early release copy in exchange for my review. 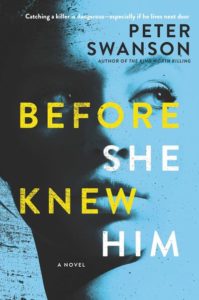 About Before She Knew Him

Catching a killer is dangerous—especially if he lives next door

From the hugely talented author of The Kind Worth Killing comes an exquisitely chilling tale of a young suburban wife with a history of psychological instability whose fears about her new neighbor could lead them both to murder . . .

Hen and her husband Lloyd have settled into a quiet life in a new house outside of Boston, Massachusetts. Hen (short for Henrietta) is an illustrator and works out of a studio nearby, and has found the right meds to control her bipolar disorder. Finally, she’s found some stability and peace.

But when they meet the neighbors next door, that calm begins to erode as she spots a familiar object displayed on the husband’s office shelf. The sports trophy looks exactly like one that went missing from the home of a young man who was killed two years ago. Hen knows because she’s long had a fascination with this unsolved murder—an obsession she doesn’t talk about anymore, but can’t fully shake either.

Could her neighbor, Matthew, be a killer? Or is this the beginning of another psychotic episode like the one she suffered back in college, when she became so consumed with proving a fellow student guilty that she ended up hurting a classmate?

The more Hen observes Matthew, the more she suspects he’s planning something truly terrifying. Yet no one will believe her. Then one night, when she comes face to face with Matthew in a dark parking lot, she realizes that he knows she’s been watching him, that she’s really on to him. And that this is the beginning of a horrifying nightmare she may not live to escape. . . 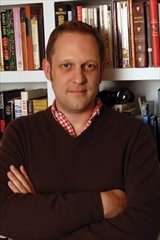 Peter Swanson is the author of three novels: The Girl With a Clock For a Heart, an LA Times Book Award finalist; The Kind Worth Killing, winner of the New England Society Book Award, and finalist for the CWA Ian Fleming Steel Dagger; and his most recent, Her Every Fear. His books have been translated into 30 languages, and his stories, poetry, and features have appeared in Asimov’s Science Fiction, The Atlantic Monthly, Measure, The Guardian, The Strand Magazine, and Yankee Magazine. A graduate of Trinity College, the University of Massachusetts at Amherst, and Emerson College, he lives in Somerville, Massachusetts with his wife.

Wednesday, March 20th: Into the Hall of Books

I'm a Canadian Engineer in Training with a love for bookishness... relocated to Minneapolis, USA in 2016, with lots of #WaterLove for cool new water and wastewater tech. I'm an avid Dressage rider, currently based at Thomas Farm in Delano, MN. #twohearts

I usually don’t read this genre, but your review makes me want to go buy this right now! Is it scary (like don’t read before bed type suspense)?

I don’t think so – I would think of this more as a page turner type suspense novel than a true “scary” read!

I really liked this one, too and man…. I’m looking at my neighbors completely differently now, that’s for sure! Thanks for being on this tour!