Review: The Lost Girls of Paris

Story: As World War II is ramping up, the British military is working hard to sabotage German efforts in and around France in advance of the Allied invasion. As a member of the Special Operations Executive, Eleanor Trigg is the founder and commander of a group of female agents trained to further these efforts. The Lost Girls of Paris follows Eleanor, one of her girls, and an unlikely American who together are able to shed light on the the heroic efforts of this unit despite challenges from friends and foe.

She reached the bench and looked over her shoulder to make sure no one in the hurried crowd was watching. She knelt and peered beneath the bench.

Why: I really enjoyed author Pam Jenoff‘s book The Orphan’s Tale, and was excited when I saw a new title from her! Double that excitement when it was another WWII tale, and triple it when it was a British-based story of women’s efforts! A WWII book will always get my attention, but as of late, I have been trying to read more titles that are not centered on Americans. Grace is an American in this novel, but she is following the story of the British women, and Jenoff does an excellent job providing a glimpse into the British government at that time.

She was sending them into Occupied France and several of them into the Paris area, a viper’s nest controlled by Hans Krueger and his notorious intelligence agency, whose primary focus was finding and stopping agents exactly like the girls. They would need every ounce of wit, strength and skill to evade capture and survive.

Opinion: I loved this book! At one point, I remember telling my husband that Jenoff is a master of suspense. That same night, I didn’t sleep well because I was imaging the depth of anxiety and stress the characters were under! (I’m an extremely empathetic person and I don’t see most normal readers reacting this way.) The story telling, the well-paced character development, and honest, human dialogue keep the reader entertained and eager for more throughout the work. I found myself equally engaged in each storyline and appreciated Jenoff’s plot construction. I wasn’t overly thrilled with the ending, but think it is fitting and provides the closure I need at the end of a book.

The first thing that should have tipped Eleanor off was the lack of mistakes.

Recommendation: This is a great read for fellow WWII junkies, readers who look for strong female characters, and those of us who like suspenseful reads that aren’t “thrillers.” There are some tastefully-done, but almost painful-to-read passages regarding the atrocities that took place at the concentrations camps, as well as open discussions of the deaths that agents suffered. I wouldn’t recommend this for younger readers unless they are extremely mature. If you are looking for a drama this winter, I would highly suggest trying to get your hands on this new novel!

She leapt for the door and the daylight beyond. She was powerless no more. She could do this.

About The Lost Girls of Paris

From the author of the runaway bestseller The Orphan’s Tale comes a remarkable story of friendship and courage centered around three women and a ring of female secret agents during World War II.

One morning while passing through Grand Central Terminal on her way to work, Grace Healey finds an abandoned suitcase tucked beneath a bench. Unable to resist her own curiosity, Grace opens the suitcase, where she discovers a dozen photographs—each of a different woman. In a moment of impulse, Grace takes the photographs and quickly leaves the station.

Grace soon learns that the suitcase belonged to a woman named Eleanor Trigg, leader of a network of female secret agents who were deployed out of London during the war. Twelve of these women were sent to Occupied Europe as couriers and radio operators to aid the resistance, but they never returned home, their fates a mystery. Setting out to learn the truth behind the women in the photographs, Grace finds herself drawn to a young mother turned agent named Marie, whose daring mission overseas reveals a remarkable story of friendship, valor and betrayal.

Vividly rendered and inspired by true events, New York Times bestselling author Pam Jenoff shines a light on the incredible heroics of the brave women of the war and weaves a mesmerizing tale of courage, sisterhood and the great strength of women to survive in the hardest of circumstances.

Pam Jenoff was born in Maryland and raised outside Philadelphia. She attended George Washington University in Washington, D.C., and Cambridge University in England. Upon receiving her master’s in history from Cambridge, she accepted an appointment as Special Assistant to the Secretary of the Army. The position provided a unique opportunity to witness and participate in operations at the most senior levels of government, including helping the families of the Pan Am Flight 103 victims secure their memorial at Arlington National Cemetery, observing recovery efforts at the site of the Oklahoma City bombing and attending ceremonies to commemorate the fiftieth anniversary of World War II at sites such as Bastogne and Corregidor.

Following her work at the Pentagon, Pam moved to the State Department. In 1996 she was assigned to the U.S. Consulate in Krakow, Poland. It was during this period that Pam developed her expertise in Polish-Jewish relations and the Holocaust. Working on matters such as preservation of Auschwitz and the restitution of Jewish property in Poland, Pam developed close relations with the surviving Jewish community.

Pam left the Foreign Service in 1998 to attend law school and graduated from the University of Pennsylvania. She worked for several years as a labor and employment attorney both at a firm and in-house in Philadelphia and now teaches law school at Rutgers.

Check out these other sites for more on The Lost Girls of Paris! 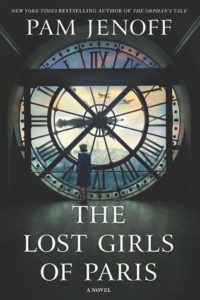 Thank you for being on this tour!