The Hollow Middle is a deep, character-driven novel that is masterfully crafted. I received a copy of the book from Unsolicited Press, in exchange for an honest review. Debut novelist (but no stranger to the world of print) Popielaski brings his protagonist Albert Lesiak to life in this meticulous story. Is it a coincidence that Lesiak’s name can be crafted from the last letters in Popielaski’s name? I do certainly wonder at this coincidence and others. Albert’s keen interest in biology echoes the author’s biologist background. While I by no means think that the two are the same, I always appreciate when authors leave a little piece of themselves like this.

I appreciated wholeheartedly the return of this text to what I must call “real writing”. Honestly, after reading lots of lighter literature, this book can come as a bit of a shock. I actually found myself noticing how lengthy the sentences could be through the text – not that this is a bad thing at all, but I do think it reflects a more adult, aged style of writing that is less seen in contemporary published works. However, as other TLC reviewers have noted, you have to be in the right space of mind to read The Hollow Middle. It takes more thoughtfulness and attention to adequately intake the details of this fine novel.

About The Hollow Middle 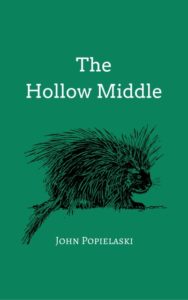 The Hollow Middle follows Albert Lesiak, an aging English teacher in Connecticut, who receives a windfall in delayed acknowledgment of the government’s complicity in his father’s cancer death and decides that it is time to live a different life on land he owns in Maine.

When his wife Mary suggests that they could foster or adopt autistic twin boys she fell in love with on a website and could use the stipend money in furtherance of Albert’s vision, Albert gradually perceives himself as possibly adapting to the role of patriarch.

A meditation on the curiosity of making sense and the dilemma of becoming true, The Hollow Middle ambles, mostly, and goes still for periods of various duration, acting like it’s not beholden after all to the rhetorical. 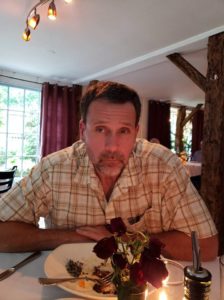 John Popielaski is the author of several poetry collections, including, most recently, Isn’t It Romantic? which won the Robert Phillips Chapbook Award from

Texas Review Press. The Hollow Middle is his first novel.

Review: Commonwealth, Patron Saint of Liars, and The...

Your comments about the writing really intrigue me – I’m looking forward to reading this one!

Thanks for being on the tour.