Looking for a book with a little bit of everything? Add this one to your list!

The main character of A Dangerous Duet, Nell, is a pretty badass woman for Victorian times. We meet her when she’s masquerading as a man playing piano at a music hall in order to make money to attend the Royal Academy. Now, I took piano lessons for seven years, so when I was reading about this book, the fact that it’s about a pianist drew me to it. There’s a ton more to it than piano playing, though!

While working at the music hall, Nell witnesses some shady activity. Her brother is an inspector at Scotland Yard, and that along with the shady activity throws her into the middle of some dangerous stuff. It was definitely something I didn’t want to put down – I wanted to get to what was going to happen next!

This book really does have a little bit of everything. There’s romance, history, crime…it all really draws you in. I’ve been enjoying more reads like this one lately that are really entertaining but also really well written. It’s a great escape! I recommend picking this one up if you’re looking for an escape read. 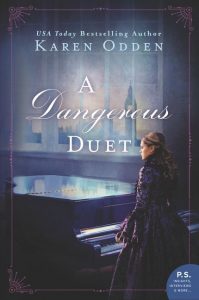 About A Dangerous Duet

This dazzling new Victorian mystery from USA Today bestselling author Karen Odden introduces readers to Nell Hallam, a determined young pianist who stumbles upon the operations of a notorious—and deadly—crime ring while illicitly working as the piano player in a Soho music hall. Perfect for readers of Tasha Alexander, Anne Perry, and Deanna Raybourn.

Nineteen-year-old Nell Hallam lives in a modest corner of Mayfair with her brother Matthew, an inspector at Scotland Yard. An exceptionally talented pianist, she aspires to attend the Royal Academy; but with tuition beyond their means, Nell sets out to earn the money herself—by playing piano in a popular Soho music hall. And the fact that she will have to disguise herself as a man and slip out at night to do it doesn’t deter her.

Spending evenings at the Octavian is like entering an alternate world, one of lively energy, fascinating performers, raucous patrons—and dark secrets. And when Nell stumbles upon the operations of an infamous crime ring working in the shadows of the music hall, she is drawn into a conspiracy that stretches the length of London. To further complicate matters, she has begun to fall for the hall owner’s charismatic son, Jack, who has secrets of his own.

The more Nell becomes a part of the Octavian’s world, the more she risks the relationships with the people she loves. And when another performer is left for dead in an alley as a warning, she realizes her future could be in jeopardy in more ways than one. 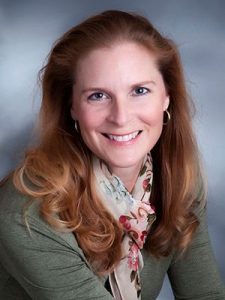 KAREN ODDEN received her PhD in English literature from New York University and has taught at the University of Wisconsin-Milwaukee and the University of Michigan-Ann Arbor. She currently serves as an assistant editor for the academic journal Victorian Literature and Culture. Her debut novel, A Lady in the Smoke, was a USA Today bestseller.

Tuesday, November 6th: Into the Hall of Books

Wednesday, November 14th: I Wish I Lived in a Library

It sounds like this really does have a bit of everything in it!