How do you decide when to give up...
Book Review: The Things We Cannot Say
#amreading: LQ’s Most Recent Reads – February 2020
The Incendiaries: A Review
Be My (Literary) Valentine
Book Review: Minor Dramas & Other Catastrophes
5 Romantic Graphic Novels to Cozy Up with...
Mysteries That’ll End a Reading Slump
TBR Mix n’ Mingle – February 2020
Review: Truly Devious Series
Book ReviewsSuspense/Thriller

Book Review: The Last Thing I Told You

If you’re looking for a well-written dark and twisty thriller, The Last Thing I Told You is a must read.

I haven’t read any of Arsenault’s other books, but I have always been a fan of psycho-thrillers. This story revolves around the murder of a psychologist and written from two points of view: Henry (detective) and Nadine (former patient).

Each chapter we learn a little more about Nadine’s inner thoughts as she continues talking to her former (dead) therapist and we get a little closer to finding out who did it, from Henry’s perspective. It also bounces between the past and the present, so you have to be aware of where in time you are throughout the book.

And, I’m happy to say the writing was on point. Arsenault’s writing style was a little slower paced than other thrillers, but I appreciated the character development, the tension and the twists that kept me on my toes. I’m looking forward to reading more of her books.

About The Last Thing I Told You 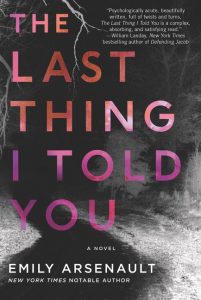 From the acclaimed author of The Evening Spider and The Broken Teaglass comes this psychological thriller about the murder of a psychologist in a quiet New England town and his former patient whose unreliable thread will keep readers guessing until the shocking end.

Why did I ever come back here? Surely because of you. Because I thought of something I’d always meant to tell you. Because you were the only one I ever really wanted to tell it to…

Therapist Dr. Mark Fabian is dead—bludgeoned in his office.

But that doesn’t stop former patient Nadine Raines from talking to him—in her head. Why did she come back to her hometown after so many years away? Everyone here thinks she’s crazy. And she has to admit—they might have good reason to think so. She committed a shockingly violent act when she was sixteen and has never really been able to explain that dark impulse—even to Fabian. Now that Fabian’s dead, why is she still trying?

Meanwhile, as Detective Henry Peacher investigates Fabian’s death, he discovers that shortly before he died, Fabian pulled the files of two former patients. One was of Nadine Raines, one of Henry’s former high school classmates. Henry still remembers the disturbing attack on a teacher that marked Nadine as a deeply troubled teen.

More shockingly, the other file was of Johnny Streeter, who is now serving a life sentence for a mass shooting five years ago. The shooting devastated the town and everyone—including Henry, who is uncomfortable with the “hero” status the tragedy afforded him—is ready to move on. But the appearance of his file brings up new questions. Maybe there is a decades-old connection between Nadine and Streeter. And maybe that somehow explains what Nadine is doing in Fabian’s office nearly twenty years after being his patient. Or how Fabian ended up dead two days after her return. Or why Nadine has fled town once again.

But as Nadine and Henry head toward a confrontation, both will discover that the secrets of people’s hearts are rarely simple, and—even in the hidden depths of a psychologist’s files—rarely as they appear. 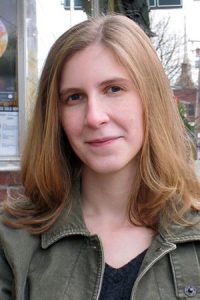 Emily Arsenault is also the author of The Broken Teaglass, In Search of the Rose Notes, Miss Me When I’m Gone, and What Strange Creatures. She lives in Shelburne Falls, Massachusetts, with her husband and daughter.

I received an advanced copy of this book from TLC Book Tours in exchange for an honest review.

Other stops on this tour:

So glad you enjoyed this one! Thanks for being on the tour.