#amreading: LQ’s Most Recent Reads – September 2020
Review: The Space Between Worlds
Five Books that Feel Like Taking a Deep...
Review: One by One by One
GIVEAWAY & Review: A Trace of Deceit by...
Review: The Doctor of Aleppo
Review: The Travelling Cat Chronicles by Hiro Arikawa
#amreading: LQ’s Most Recent Reads – August 2020
#Ownvoices YA Books Everyone Should Read: Mysteries and...
#Ownvoices YA Books Everyone Should Read: Fantasy and...
Book ReviewsLiterary Fiction

Review: A Place for Us

After I picked this book out to be on a book tour for, I started seeing it everywhere. Not only is it the first book published under Sarah Jessica Parker’s new venture, SJP for Hogarth, but it’s also been getting a lot of buzz for being one of the top most anticipated books of summer.

I’m often hesitant to pick up books that are so buzzed about, because there are SO many good books out there that don’t get the hype they deserve, and you never know if a much-buzzed about book is going to be a big let-down.

After reading A Place for Us by Fatima Farheen Mirza, I’m happy to say that, in my opinion, this one is worthy of all the buzz! I gave it four stars – there were just a few things that kept me from giving it the full 5.

At its core, A Place for Us is about a Muslim family living in America. Mom, Layla, and dad, Rafiq, immigrated from India and have three children in the United States, making them first-generation American.  The children, Hadia, Huda, and Amar, are brought up in a fairly strict Muslim faith.

The story opens at an Indian wedding: Hadia’s. We learn within the first chapter that Hadia is marrying a man she’s chosen for herself, and was unsure that would ever happen. We also learn that the family hasn’t seen Amar in three years, so something must have happened to estrange him. This sets up the entire novel, and when we get to Part Two, we’re back in the past.

What I loved about A Place for Us was the way Mirza seamlessly weaves together family, identity, religion, and love. Each character struggles with each of those things in his or her own way, and Mizra used their different points of view to narrate the story so very well. It pulled me in and endeared me to each character separately, which gave me a unique perspective of each one, even when the story was being told from another’s point of view.

While I really loved that portion of the way this book was written, I had a hard time with the time jumps. I can see how they added to the story, with seeing an incident and then going back into the past to explain how the characters are the way they are or into the future to see how it affected them, but you’ll just be reading sections of a chapter and suddenly be in a different time AND from a different perspective. It all just got a little discombobulating, orienting yourself back with another character in another time altogether.

Another thing that I really did like about this book is that it’s about being Muslim in America, yet family and relationships are the focus, not that. It’s definitely a piece of the novel, having clearly affected each character, but it’s not the focus. I felt like this book could have run away in that direction, but it really didn’t. While I’d like to read something like this about being a Muslim in America during the last two decades or so, I was glad that the story continued to focus on family from beginning to end.

Overall, A Place for Us was a fantastic read, and one that I definitely recommend picking up. 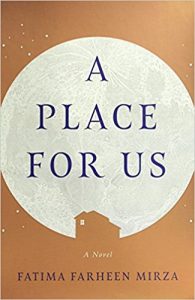 The first novel from Sarah Jessica Parker’s new imprint, SJP for Hogarth, A Place for Us is a deeply moving and resonant story of love, identity and belonging

As an Indian wedding gathers a family back together, parents Rafiq and Layla must reckon with the choices their children have made.

There is Hadia: their headstrong, eldest daughter, whose marriage is a match of love and not tradition. Huda, the middle child, determined to follow in her sister’s footsteps. And lastly, their estranged son, Amar, who returns to the family fold for the first time in three years to take his place as brother of the bride.

What secrets and betrayals have caused this close-knit family to fracture? Can Amar find his way back to the people who know and love him best?

A Place for Us takes us back to the beginning of this family’s life: from the bonds that bring them together, to the differences that pull them apart. All the joy and struggle of family life is here, from Rafiq and Layla’s own arrival in America from India, to the years in which their children — each in their own way — tread between two cultures, seeking to find their place in the world, as well as a path home.

A Place for Us is a book for our times: an astonishingly tender-hearted novel of identity and belonging, and a resonant portrait of what it means to be an American family today. It announces Fatima Farheen Mirza as a major new literary talent.

“A Place for Us is a triumph and an inspiration. I wish everyone would read this novel. A chronicle of the shattered expectations and irreconcilable desires within an American-Muslim family, A Place for Us hums with a deep faith in an unknown future, reminding its readers that when we are lost, love gives us a map home.”— KAREN RUSSELL, author of Swamplandia!

“A Place for Us is a radiantly envisioned, beautifully achieved epic about nearly everything that matters: love, family, faith, freedom, betrayal, contrition, absolution. Fatima Farheen Mirza is a magnificent new voice.” — ANTHONY MARRA, author of A Constellation of Vital Phenomena 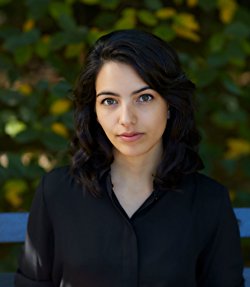 FATIMA FARHEEN MIRZA was born in 1991 and raised in California. She is a graduate of the Iowa Writers’ Workshop and a recipient of the Michener-Copernicus Fellowship.

Find out more about A Place for Us at sjpforhogarth.com.

Tuesday, June 12th: Simone and Her Books and @simoneandherbooks

Tuesday, July 3rd: Some Kind of a Library and @somekindofalibrary

Yes I agree the time jumps were a bit tricky in the story — and it was quite a slow-burn of a novel that had some slow spots, but still I felt it was moving and tragic that the son becomes estranged from all of them. It felt like if they only had communicated Better!

I agree, it was definitely moving! A lovely story in general 🙂

This book is high on my TBR list – it sounds SO good!

[…] second book I read this summer that focuses quite a bit on Indian culture – the first being A Place for Us by Fatima Farheen Mirza. I would recommend both of them, although for very different […]