Before I even begin this review, let’s go over the hype for this book, shall we? Here we go…

Wowsers. Clearly I had an expectation that I was going to like this book, because everyone else seemed to!

In 1985, Yale Tishman, the development director for an art gallery in Chicago, is about to pull off an amazing coup, bringing in an extraordinary collection of 1920s paintings as a gift to the gallery. Yet as his career begins to flourish, the carnage of the AIDS epidemic grows around him. One by one, his friends are dying and after his friend Nico’s funeral, the virus circles closer and closer to Yale himself. Soon the only person he has left is Fiona, Nico’s little sister.

Thirty years later, Fiona is in Paris tracking down her estranged daughter who disappeared into a cult. While staying with an old friend, a famous photographer who documented the Chicago crisis, she finds herself finally grappling with the devastating ways AIDS affected her life and her relationship with her daughter. The two intertwining stories take us through the heartbreak of the eighties and the chaos of the modern world, as both Yale and Fiona struggle to find goodness in the midst of disaster.

The big question is, did The Great Believers live up to all those praises and prizes for me? The short answer: yes.

First of all, I enjoyed the structure that Makkai chose for this story. I don’t love every book that jumps back and forth in time, as it can be hard to follow and make you feel jerked around. In The Great Believers, though, there are enough ties between the two time periods to truly feel like you’re reading the same story, just later on. The author is clearly talented, and the book comes off most definitely as literary fiction.

The story itself is immersive, for the most part. I felt really invested in Yale’s life and was rooting so hard for him to avoid AIDS, and also felt connected to Fiona in her part of the story. It’s hard to imagine what Boystown must have felt like when so many were dying from such a mysterious disease, but Makkai paints a pretty vivid image.

While reading about the deaths of so many is hard, there’s also so much love in this book: love between friends, lovers, siblings, mothers, daughters, family. Of course, along with all that love comes a whole lot of grief, too, as grief is only born out of love.

The book itself, though, was long. Super long. It took me way too much time to get through the thing! I don’t get super long bits of time to read anymore, as a mom with a 1-year-old, so reading this for an hour at a time maximum just took me forever. It’s not a fast read. While it does feel like the length is necessary for most of it, there were pieces of the story that I didn’t feel contributed much to the overall novel. I thought that some of the art bits could have been less detailed or have less time spent on them, as well as the whole cult thing with Fiona’s daughter.

If you’ve read this book, please let me know your thoughts in the comments on whether or not it was too long!

Overall, I think the hype and awards are deserved. This book is really gorgeous. I give it a full 4 stars! 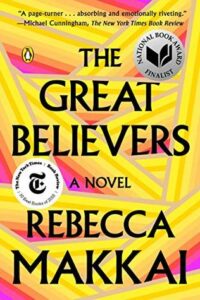