How do you decide when to give up...
Book Review: The Things We Cannot Say
#amreading: LQ’s Most Recent Reads – February 2020
The Incendiaries: A Review
Be My (Literary) Valentine
Book Review: Minor Dramas & Other Catastrophes
5 Romantic Graphic Novels to Cozy Up with...
Mysteries That’ll End a Reading Slump
TBR Mix n’ Mingle – February 2020
Review: Truly Devious Series
Book ReviewsMemoir/Biography

Review: Neither Wolf nor Dog

Neither Wolf nor Dog: On Forgotten Roads with an Indian Elder is a must read. I devoured this book, slowly and purposefully, realizing early on these were words to savor.

Half memoir and half travel log, Neither Wolf nor Dog chronicles writer Kent Nerburn’s time with a Lakota elder, Dan, who wants to impart what he’s learned before he passes. Nerburn travels to Dan’s home, an undisclosed reservation in South Dakota, to gather Dan’s thoughts. In the process, Nerburn discovers that this journey won’t be a straightforward one. 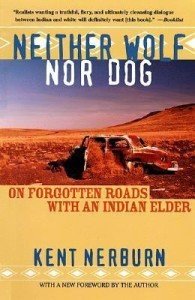 Nerburn writes beautifully, describing the prairie and rolling hills of South Dakota. Being from Southwest Minnesota, these images were familiar and welcome. Nerburn also captures pain and heartache through Dan’s lectures, which are impactful and often inflammatory. It’d be easy to feel offended or uncomfortable with some of the things he says. In fact, I think it’d be weird not to feel some sort of discomfort, as a white person, while reading this.

Dan’s thoughts range from religion, freedom vs. honor, and the whitewashed version of “American” history. One of the most enlightening things about this book was Dan’s explanation of using Indian vs. Native American. White settlers named this land America, so in Dan’s eyes, Indian and Native American are the same.

“A tragedy has taken place on our land, and even though it did not take place on our watch, we are its inheritors, and the earth remembers.” – Dan

My biggest critique of the book is one that Nerburn points out himself. Can a white person ever really enter the Indian/Native American space without becoming a “white savior?” I’m not sure what the answer is, but I think this book is important reading.

This is required reading for any and all ages. I’d recommend reading this with a book club or have someone else read it so you can discuss together. It’s a book that necessitates thinking and requires some introspection. 4 out of 5 stars.

I'm an eLearning developer by day and a foodie, Netflix enthusiast, and book lover at all times.